HomeJack Rawlings – From College to Cooking at Coutts

Jack Rawlings – From College to Cooking at Coutts 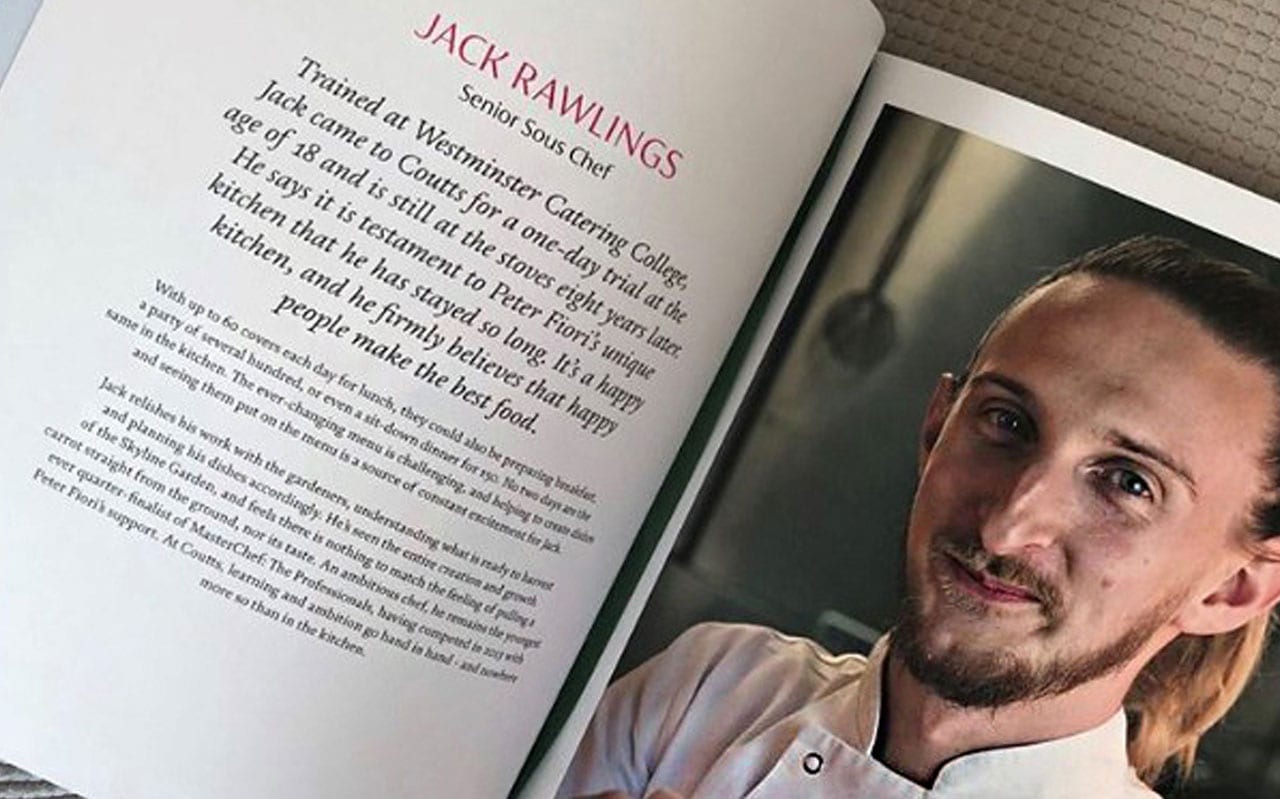 Westminster Kingsway College alumnus Jack Rawlings was just 16 when he enrolled at the college in 2006. Studying for three years in our renowned Victoria Centre, he now works in an exclusive fine-dining restaurant in the London headquarters of Coutts, the leading private bank. Jack sat down with us recently, to reflect on his time at college and the world of cooking for a living.

“When I first joined WestKing I was not only a different chef but a different person. I took part in work experience across all three years of my course which really helped me.

“College wasn’t just about Monday to Friday. It gave me experience in the industry to make me a better chef. In my first year, I went to a contract catering unit in Moorgate. In my second year, I went to Claridges and in my third, I went to a Michelin-starred restaurant in Mayfair.”

Westminster Kingsway College works with a large number of industry professionals, which allows the college to tailor work experience to the career ambitions and natural talents of each student. Work experience is often discussed between staff and students, making it less ‘take what you are given’ and more an opportunity to get involved and play an active role in carving out your path.

Jack went on to talk about his time at the college and the extra-curricular activities he participated in: “I took part in a lot of competitions while at college and one tutor in particular, Vince Cotton, was my mentor for these events. To have someone there for me during quite a stressful time, someone who was so experienced not only as a chef but also as a competitor was amazing to have.

“I travelled around the country and was even lucky enough to go to the USA after winning the Escoffier competition [a competition in which the top five third-year students design menus and then compete against each other in a week-long finale] and visiting the Institute of Culinary Arts for a week in North Carolina. To experience this while at college was great and isn’t something you get everywhere.”

Just two months after completing his course at Westminster Kingsway College, Jack started a full-time job at Coutts Bank. Founded in 1692, Coutts is one of the oldest banks in the world and looks after some of the most prestigious clients in the UK. Jack got a one-day trial at the bank’s restaurant while working at the college and, nine years later, is still a permanent member of staff.

Jack said: “When I first started at Coutts I was on the stove cooking meat and fish within my first two weeks. This is a massive role in the kitchen and it made me feel great that the head chef had faith in me to do it. I was thrown in at the deep end, but this helped me progress into the position I am in the business now.

“In my nine years here I have learnt so much and progressed through six job roles. I started as a commis chef, then went up to demi chef de partie, chef de partie, junior sous chef, sous chef and now senior sous chef. I now have a great relationship with all of the chefs and this is because we have all been there so long. This is quite unusual for any Michelin-starred restaurant and the culinary industry in general. I think this is because of the sociable hours, Monday to Friday, so I get my weekends. We do evening work but you get paid overtime for that. Normally, if you want this work/life balance in the industry you either have to compromise on pay or quality of food. Here at Coutts, you don’t.”

“I am very happy with my job. I have always said if I am learning then I will be happy and I am still learning every day.”

Jack’s culinary excellence has been allowed to blossom on stages beyond the Coutts restaurant floor. In 2013 he took part in Professional Master Chef. Jack said “One of the highlights of my journey so far, I would have to say, would be taking part in Professional Master Chef after my head chef asked me to apply. After passing the phone interview and the face to face interview I made it onto the show and to date, I am the youngest chef to ever make it to the quarter-finals. It was a good experience and I learnt so much. I just wish I had waited till now in my career to go on the show as I have learnt so much since and think I could go even further.”

The relationship between Westminster Kingsway College and Coutts extends much further than Jack; in fact, Baroness Burdett-Coutts, of the Coutts family, funded the building of the college’s Victoria Centre and the restaurant is also home to many other WestKing alumni.

“I am not the only one from Westminster Kingsway College here at Coutts. At one point we had seven people from the same year in the Coutts kitchen, we still get international students coming from WestKing and we also have regular students from the same diploma course that I studied.

“My executive chef has always had college students in his kitchen on work experience and many of them come from Westminster Kingsway College due to the standard of chefs they produce. There is still one chef at Coutts who was in my year at college, our head pastry chef was one year below me at college, one of the junior sous chefs did the part-time course at WestKing – you really see a difference. We even have lecturers from WestKing coming in during their students’ rotations in the kitchen. They get to sit down with the student and us, and have a chat about how the student is doing.”

We use cookies to ensure that we give you the best experience on our website. If you continue to use this site we will assume that you are happy with it.OkPrivacy policy