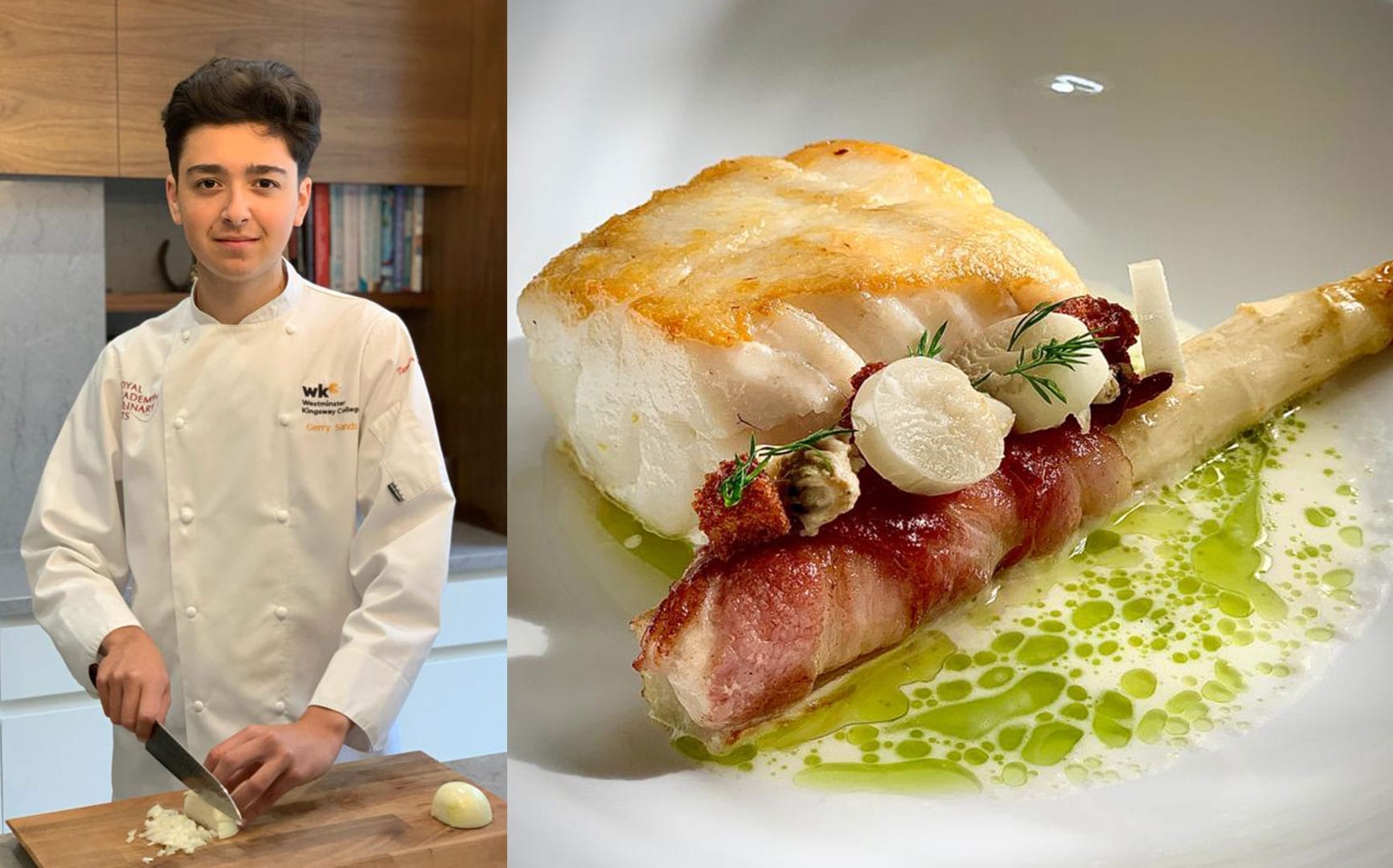 One of our apprentice chef’s fin-tastic culinary skills have seen him named a runner-up in a national seafood cookery competition. Gerry Sands, 18, was among the finalists in the Classics at Home competition, run by the Norwegian Seafood Council, for his dish of cod and clams with asparagus and bacon.

Gerry just missed out on the top prize to a Michelin starred chef in the contest judged by food experts including top chefs Michel Roux Jr. and Simon Hulstone.

Gerry, from Barnet, north London, said: “It was a big competition and I learnt a lot doing it. I didn’t have any expectations and was shocked and humbled Michel Roux Jr. and Simon Hulstone chose my dish from the hundreds of entries.

“They said they liked the overall presentation, the golden crust and colour of the pan-roasted cod and that the barded white asparagus was a nice touch.

“They told me to stick with what I am doing because I’m heading in the right direction.”

Gerry’s dish was inspired by the style of Dominic South, Head Chef at the Corinthia London Hotel, where he is undertaking his apprenticeship, and American chef, Thomas Keller.

He said: “I’ve always had a passion for food and eating. I enjoy working with food and love learning about different produce, its flavour and preparation.

“I’m learning from some of the best chefs in the industry and using incredible ingredients every day. As long as I’m in the kitchen and cooking, I’m doing my dream job and the thing I love most.”

The Classics at Home competition was open to all working, student and apprentice chefs in the UK and Northern Ireland.

Competitors had to create a dish using seafood from Norway or the north east Atlantic and then post it to Instagram with a description of the dish and cooking method.

The finalists were asked to make an Instagram video of them creating their dish before an online chat on seafood preparation and sustainability with Michel Roux Jr and Simon Hulstone.

Gerry began his Royal Academy of Culinary Arts commis chef apprenticeship in September 2019. He is expected to complete this in January and continue his training on a chef de partie apprenticeship.

Nick Gunyon, Lecturer in Culinary Arts, said: “Gerry always pushes the boundaries with his presentation skills and his food is always well-flavoured and beautifully cooked. He has received some wonderful reviews and is very well thought of by his head chef.

“He is a very committed member of his class and has achieved a fantastic result in the Norwegian Seafood Council competition. I am very proud of his dedication and all his achievements.”

Find out more about our Hospitality and Culinary Arts courses and apprenticeships.