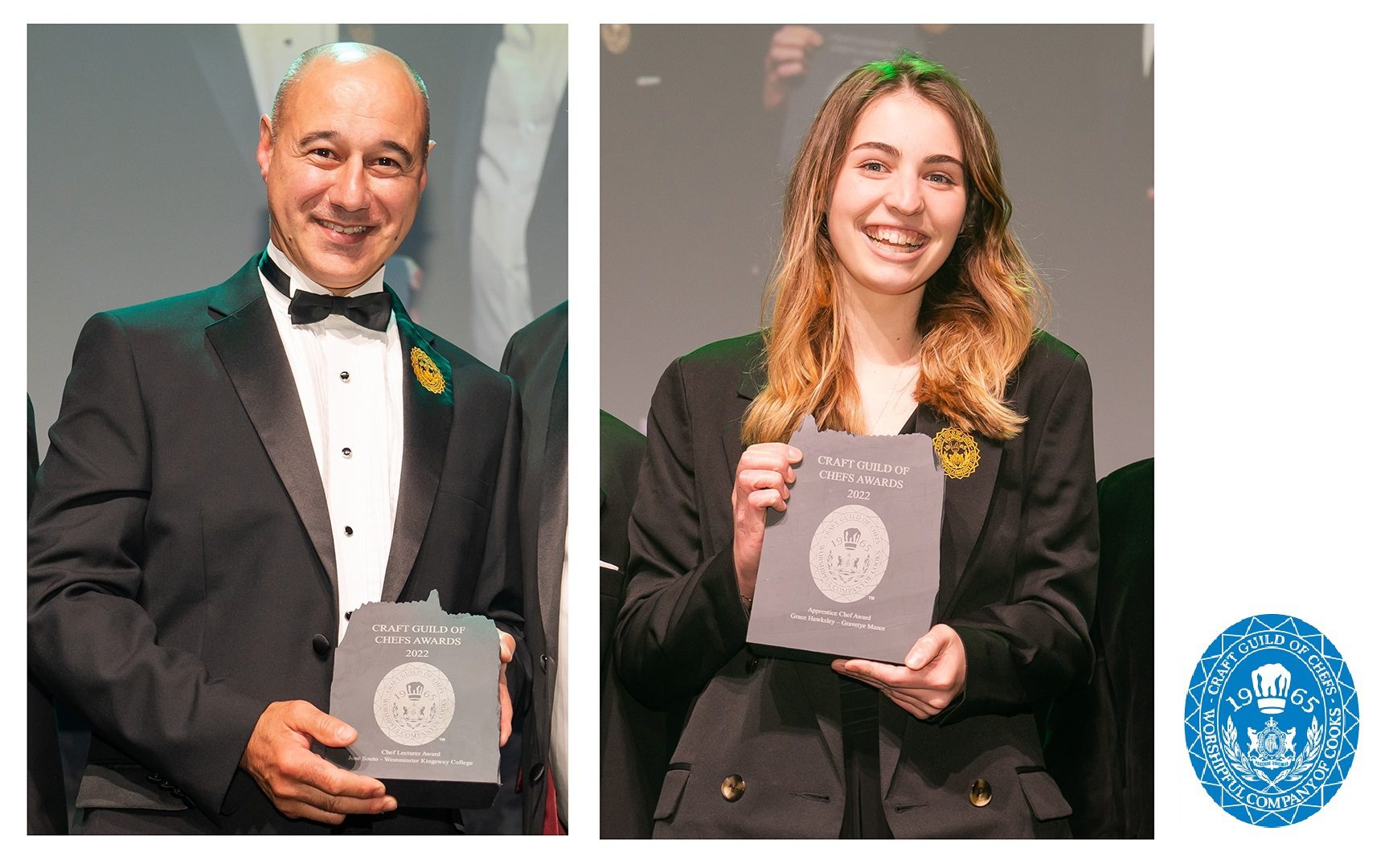 A chef lecturer and an apprentice from Westminster Kingsway College are celebrating after being named winners in the prestigious Craft Guild of Chef Awards 2022.

Jose Souto, who has taught at the college for 18 years, scooped the Chef Lecturer Award, while chef de partie apprentice Grace Hawksley was presented with the Apprentice Chef Award.

The Craft Guild of Chefs Awards recognise exceptional talent in the industry, from apprentice and young chefs starting out to established chefs in hospitality, pubs and restaurants.

Jose and Grace received their awards from Andrew Green, Chief Executive of the Craft Guild of Chefs, and Nick Vadis, Culinary Director of Compass Group UK respectively, at a glittering ceremony at Magazine London in Greenwich on 9 June.

Before joining WestKing, Jose had worked as a Chef de Partie at the House of Commons for more than 20 years where he began as a sous chef. During this time he also worked at The Ritz, The InterContinental, Mosimann’s and the Savoy Grill.

Lorcán, from Tower Hamlets, was among eight apprentice chefs who took part in a competition at the contract catering company’s head office in Chertsey to win the award.

Each chef was tasked with creating two courses in two hours using a mystery box of ingredients that included chicken, mackerel and seasonal produce.

Lorcán, who is training with Restaurant Associates, said: “I’m really happy to have won, it’s been a really good learning experience and has taught me to stay calm under pressure.”

All the entrants have been invited to cook at the Apprenticeship of the Year dinner at Tottenham Hotspur Stadium in July.

Congratulating Jose and Grace on behalf of the WestKing hospitality and culinary team, WestKing Assistant Principal Terry Tinton said: “Jose is an amazing educator that dedicates his work and personal time to training and supporting the next generation of chefs.

“As a senior lecturer he works tirelessly to ensure the college engages with the industry and that our curriculum offer exceeds the needs of our partners.

“Grace has always been an exceptional student and this accolade is a testament to her hard work and professionalism. The entire apprenticeship team has done a fantastic job, training, mentoring and support Grace through her studies.”

Steve Munkley, Vice President of the Craft Guild of Chefs, said: “This has been a year of exceptional challenges and I am so proud to see that we have so many worthy winners.”

Have you considered a career in the exciting hospitality industry? Chefs are in demand throughout the UK and London is a major culinary hotspot, so you too could follow Jose and Grace into the kitchen by studying at Westminster Kingsway College – one of the UK’s top culinary schools. Apply now for Hospitality and Culinary Arts courses and apprenticeships.